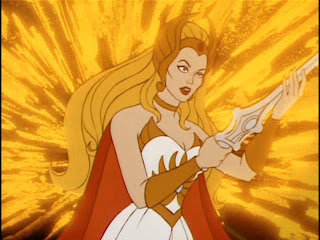 For the honor of Grayskull! Her Royal Highness Princess Adora of Eternia (aka She-Ra, Princess of Power -- or the voice actress Melendy Britt) graced the commoners and sat down for an interview in honor of the 25th anniversary of her battles with the Horde.

Thanks to the Sorceress hooking us up with an inter-dimensional line, we were able to speak with the 1980s animation icon from her current home in Etheria about being a role model to Gen-X girls, her athletic and combat prowess, and other things.


Here's what She-Ra had to say:
Q: Should we call you royal highness, Adora, She-Ra or what? We never got a memo regarding official Eternia protocol. Or should we follow protocol for the Ministry of Etheria, where you currently reside?
She-Ra: She-Ra is not big on ceremony. If you're a friend, you may call me by my name. Princess of Power is largely a symbolic title and I only expect it to be used if you are a member of the Horde. Otherwise, She-Ra would be just fine.

Q. Why do you think there are so few female role models?
S-R: A profound question! There are female role models all around you. Yes, in everyday life, there are women doing things that take superhuman courage in the face of many obstacles. If there is a woman providing unconditional love around you, She-Ra would say that that woman is a role model for you to admire.


Q. It's been 25 years. Did you finally defeat the Horde or is the rebellion an on going thing?
S-R: Unfortunately, not yet. Peace still does not rule across Etheria and we battle with the Horde to this day.


Q. You're the most powerful woman in the universe, yet your twin brother, He-Man, remains more popular. How do you cope with that?
S-R: Who says my brother is more popular? People always seem to favor brute strength more than the forces of nature. The power of nature is all around you; it doesn't need popularity.


Q. Do you ever get tired of having to save fellow rebel Bow?
S-R: No. She-Ra accepts people as they are and hopes they become more of who they have the potential of being. I believe the phrase in your world is "You gotta pick a brother up." So, while I would hope he eventually is able to save himself, for now, She-Ra is there.

Q. Your steed Spirit (aka Swift Wind) has to be getting up there in horse years. Is he still with you or have you retired him to greener pastures?
S-R: She-Ra never ages and neither does her beloved steed. He is still by me, fighting the good fight.
Q. Between you and your twin brother, who was born first? And thus, the rightful heir to the throne of Eternia?
S-R: No one ever told us who was born first and we don't really care about titles. We care about justice! If I had to choose, I would let him be first, because you know how guys are.


Q. You and your brother, Adam, live in different dimensions. How do you manage to stay in touch? Does Skype work through the wormholes between Eternia and Etheria?
S-R: We stay in touch by mental magic. I think he's in the place you call "oh-high-oh" right now. Yes, he just checked in with me. He's in your "oh-high-oh" at the moment. I don't know why he is there. He disconnected before I could ask.
Q. We've noticed that your skirt never moves (even when you do a somersault). Just what are you starching that thing with?
S-R: It was a precursor to one of your Lady Gaga's outfits. It's magical. And yet, it still works and flows. 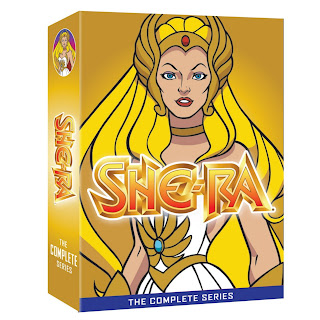 
This article originally ran in the Chicago Sun-Times Oct. 1, 2010
Posted by Misha Davenport at 6:00 AM