Drury Lane's 'next to normal' is anything but


One would never associate “next to normal” with traditional summer musical fare. Light-hearted it ain’t.  The Tony-award winning show is an uncompromising look at one family’s attempt to cope with the matriarch’s mental illness. The show also serves as an indictment of a mental health industry that at times seems more interested in grooming life-long pill-popping consumers than addressing the underlying causes of some disorders.
Musicals such as “Gypsy” have dipped the proverbial toe in the mental health water (“Rose’s Turn” is essential a nervous breakdown set to song), but few shows have ever wrote an entire book around the topic of mental health.
As a musical, “next to normal” is less “Mama Mia!” and more “Mother Courage.” This makes the current production of the show at Drury Lane Theatre in Oakbrook Terrace something of a major risk.
I mean no disrespect here, but the show’s gritty, sung-through, rock score and serious subject matter would seem to initially be incongruent with the typical, older suburban Drury Lane subscriber.
Whether it is the Pulitzer-prize winning script or the superbly acted, sung and directed show, the audience at the opening was incredibly receptive to the show.
If this production was a gamble, it has paid off in spades. In the lead role of Diana, a wife and mother trying to navigate the fine line between medication and memories, Susie McMonagle is riveting. While the show was originally a vehicle for Alice Ripley, I actually preferred McMonagle’s vocal approach to the role. True, Ripley’s voice had more of a razor’s edge than McMonagle’s that on the onset seems to be more true to the rock score, but McMonagle’s “folk-singer” style makes her Diana more approachable. If the statistics regarding mental health and bipolar disorder are to believed (and I frankly believe they are), we all know someone just like McMonagle’s Diana.
As her much put-upon yet still supportive husband Dan, Rod Thomas turns in what has to be the best performance of his career. Usually cast in comedic roles (you might have seen him in Second City’s “The People vs. Friar Laurence”), the funny man can not only emote, but also belt out the demanding score with the best of ‘em.
As son Gabe, Josh Tolle brings the needed intensity required of the role. The pacing and acting could not be better in the scenes where Gabe and Dan both engage in a tug of war in regard to Diana’s course of mental treatment. Gabe wants to flush the drugs; Dan wants to keep experimenting until they get it right. Each has their own selfish reasons for advocating their respective courses with Diana stuck in the middle.
Newcomer Callie Johnson (as daughter Natalie) has some pitch problems early on (a fate suffered by the Ms. Ripley in the original Broadway run, too). Should those persists, you’re likely to overlook them thanks to her intense portrait of a teenage girl who can’t seem to live up to perceived expectations. Her character resonated more with me than in previous productions. A second act scene between mother and daughter, set in a hospital, is exceptionally moving.
Rounding out the cast are  Skyler Adams (hilarious as Natalie’s would-be boyfriend who just won’t quit pursuing her) and Colte Julian (in the dual role of Dr. Fine and Dr. Madden). Julian finds more meat the Madden than he does in Fine, but is nonetheless engaging.
Scott Davis’ monochromatic scenic design (ok, there are black chairs so I guess it is bichromatic) perfectly captures the sterility of an average suburban home. Costume designer Sally Dolembo follows a similar pallet in the first act, slowly introducing pops of color in the second act as a way of visually capturing subtle changes to Diana’s mental state.
Under William Osetek’s direction, the pacing and flow could not be better. Actors move from fantastical scenes within Diana’s head to those grounded in reality with aplomb. “next to normal” is musical perfection; it's a theatrical moment not to be missed.
Posted by Misha Davenport at 1:43 PM 1 comment:

No Poor-Man's Porter, Theo Ubique's "A Cole Porter Songbook" adds the sizzle to the summer


Cross-posted from Broadwayworld.com
The summer sun doesn’t have anything on Rogers Park theatre troupe Theo Ubique Cabaret Theatre. The group’s latest, the musical revue “A Cole Porter Songbook” puts plenty of sizzle into the summer and has now been extended through Sept. 15.
To some extent, Cole Porter was way ahead of his time in terms of lyric and music. The musical vehicles by which those tunes appear, however, have not aged well and usually feel dated when revived. Freed of the shackles of their dated, musical conventions, the songs soar.
Rather than assemble a hitlist of familiar Cole Porter songs, music arranger Aaron Benham has included some lesser known ditties as well (full disclosure: Mr. Benham and I sang in the same section of CGMC for a few seasons).  For every familiar tune such as “Too Darn Hot” (from the often-revived “Kiss Me Kate”) you get “Come to the Supermarket in Old Peking” from Cole Porter’s last musical score, the 1958 TV musical “Aladdin.”  There is perhaps nothing more obscure than “Aladdin”; broadcasted just once as part of CBS’ “DuPont Show of the Month,” the musical is currently not available on VHS or DVD. Granted, Barbra Streisand did cover it on her 1963 self-titled album, but one could argue the tune wouldn’t be recognized by anyone other than the most ardent of Babs’ fans.
Porter was a master of the double-entendre. You still marvel at what he was able to get away with in songs like “The Physician” and Experiment (both from 1933’s “Nymph Errant”). There is so much wit and intelligence in lyrics compared to today’s standard Broadway fare. Benham served as musical director on Nightblue’s critically-acclaimed production of “Avenue Q” last season and the difference could not be –to borrow a line from Porter—more night and day.  There is something to be celebrated in not stating the obvious.
Musically, the production is something of a revelation. I have heard many of these songs in countless productions and cabaret settings and yet under the guidance of director Anzevino and Benham, this is the first time I recognized how Porter’s use of meter and melody predates the work of eminant composer Stephen Sondheim. Sondheim’s respect and reverence for Porter is a bit of a foregone conclusion.
Of course, a musical revue is only as good as its performers and Anzevino had assembled a truly remarkable quartet.
Sierra Naomi has some very big shoes, er pipes to fill tackling the Ethel Merman standard “Anything Goes” as well as the Roy Rangers standard “Don’t Fence Me In” (from “Anything Goes” and the film “Hollywood Canteen,” respectively. In both cases, she manages to own each piece as if it were written just for her.
Christopher Logan is a charming hoofer and along with William Lucas (a dashing, boy-next-door type), manages to milk every last laugh out of “Brush Up Your Shakespeare.” Joined by Jill Sesso in a medley of “Let’d Do It” and “Let’s Not Talk About Love”  (1928’s “Paris” and 1941’s “Let’s Face It,” respectively) and later in the evening in the medley of “Experiment,” and “Let’s Misbehave” (the latter actually cut from “Paris,” and added to the 1962 revival of “Anything Goes”), Logan, Lucas and Sesso form a passionate yet tasteful menage a trois that would have no doubt delighted the late composer.
If it were possible for there to be one standout in all this talent, it is Ms. Sesso. Her work on the previously mentioned medleys as well as in “I Get a Kick Out of You” (from “Anything Goes”) and “It’s De-Lovely,” (1936’s “Red, Hot & Blue”) is a sight to be seen. She is an up and coming actress that is definitely one to watch.
Anzevino’s direction is minimal, allowing the voices of his talented cast, the choreography by David Heimann,  the superb vocal arrangements by Benham  and the tight-knit three-piece band (Benham works double duty tinkling the keys) truly to shine.
It is particularly apparent in the show’s many ensemble numbers. You are unlikely to hear anything more glorious than the gorgeous harmonies of “Night and Day” (from 1932’s “Gay Divorce”) and you just may find yourself once again “So In Love” with the lyrics and melodies of one of the Golden Age of Broadway’s brightest composers.
“A Cole Porter Songbook” is running through Sept. 15 at the Theo Ubique Cabaret Theatre at No Exit Café, 6970 N. Glenwood. Tickets, $29-$59. (800)595—4849. www.theo-u.com.
Posted by Misha Davenport at 11:33 AM No comments:

1983's "Flashdance" was what passed for a movie musical in the 1980's. It was a series of quick-cut, frantic music videos stretched around a simple (and implausible) plot involving an 18 year-old steel welder by day and stripper by night who dreams of attending a prestigious dance academy far beyond both gritty factories and stripper poles. Though critically lambasted (the late Sun-Times film critic Roger Ebert has it on his "most hated" films list), it went on to earn more than $148 million world-wide and spawned a slew of top 10 hits including "Flashdance...What a Feeling," "Maniac" and "Gloria."

And now, much like 1980s movie musicals such as "Footloose" and "Urban Cowboy," the 30 year-old film "Flashdance" is being prepped for new life as a Broadway musical.

Where's a good arc welder when you need one? The bones of a decent musical are present, but some cutting and soldering are needed if the show hopes to fair better on the Great White Way than those two other shows.

Let's say you are able to suspend disbelief over the original film's plot. At its core, "Flashdance" isn't a bad idea for a stage musical. A plucky, working class gal Alex Owens (an endearing yet still ‘edgy” Jillian Mueller) dreams of reaching for that brass ring, overcoming the systems of class, education, economics and gender. 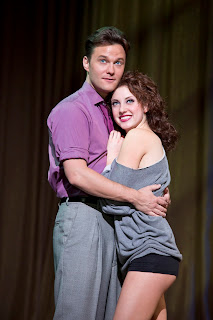 Her love interest is Nick Hurley (Matthew Hydzik , a charming, boy-next-door type), the grandson of the owner of the factory where Alex works. The pair share decent chemistry, initially clashing before falling in love. The two romantic scenes in the show come off awkward,though. Mueller is a relatively petite actress and is nearly on pointe any time she has to kiss her much taller leading man.

A trio of Alex’s fellow cabaret dancers Gloria (a Madonna-esque Kelly Felthous), Kiki (Dequina Moore channeling Grace Jones) and Tess (Haley Hannah) serve as a sort of Greek chorus, lending their pipes to most of the more well-known songs from the film. Each is given an individual moment in the spotlight with a solo number, too. Moore’s version of “Manhunt” sizzles enough that you just might forget the original. Hannah gyrates and does her best to breathe life into the over-used “I Love Rock ‘N’ Roll.” Felthous, who has perhaps the second best voice in the cast (behind Moore) draws the short end of the straw with a terrible ensemble arrangement of “Gloria.” 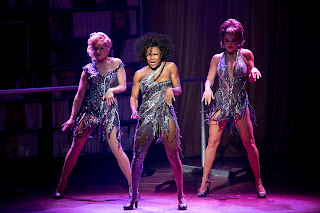 “Gloria” notwithstanding, the score soars when recreating the hit songs from the film soundtrack, but the 16 songs representing the new music and lyrics by Robbie Roth (with additional lyrics by Robert Cary), while succeeding in capturing the saccharine nothingness of many a ‘80s pop ballad, are nonetheless instantly forgettable thanks to some truly clunky and forced rhyming.

Director/choreographer Sergio Trujillo ("The Jersey Boys" and "Memphis") manages to both pay homage to the film’s original choreography and put his own signature onto things. The ensemble dance numbers in particular are energetic and mesmerizing. The film’s iconic water scene even feels fresh and new.