Back for a second helping, "To Master the Art" continues to satiate our hunger for good theater


You probably don’t need the sweet, buttery smell of shallots cooking to know that TimeLine Theatre Company’s production of “To Master the Art” is the theatrical equivalent of comfort food. It would be nostalgic, sentimental and absolutely delicious without the onstage cooking.

And while the smell of cooking shallots will have you salivating, it is the performance of Karen Janes Woditsch as famed chef and author Julia Child that foodies and fans of good theater will savor.

Woditsch gives one of the best performances of this season and the show is not to be missed.
Though essentially a remounting of TimeLine’s 2010 off-Loop hit (there have been some minor tweaks to the book by William Brown and Doug Frew), this is anything but a reheated leftovers. Woditsch gives a performance that has both aged like a fine wine and marinated like a cut of beef. It’s sumptious, humorous and ultimately uplifting. There is perhaps no greater honor to a master chef who once quipped that food was “one of the simplest and nicest pleasures.”

The play’s plot doesn’t cover much new ground (most of this was covered in either Child’s autobiography My Life in France and/or in the film “Julie & Julia”). Gourmands and fans of the late chef and author will find all the major highlights of Child’s time in France are covered here from the development of her sophisticated palate after a soul and spirit-defining first meal in France (a lunch of oysters, sole meunière and , because it is after all France, a bottle of white wine), through her humble determination to be accepted as an equal and not just some American debutante at the famed Le Cordon Bleu cooking school.

The play also dwells on Child’s study under master chef Max Bugnard (the superb Terry Hamilton), her fateful meeting with Simone Beck (Jeannie Affelder, whose Simca gradually warms to both Child as a person and the nickname of “Simca” that Child bestows on her), the co-founding with Beck of the cooking school L'école des trois gourmandes, the decade spent writing the groundbreaking 726-page tome “Mastering the Art of French Cooking” with her and the struggle to get the book, which would eventually have an impact on American kitchens which continues to this very day. 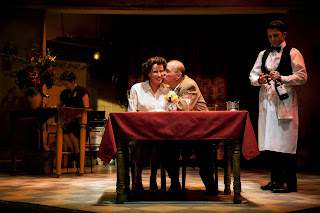 Child’s relationship to her husband Paul (Craig Spidle) is, of course, tested while she struggles to get her book published and he is interrogated in Washington D.C. at the height of McCarthyism. The pair is a little too supportive of each other’s life choices and endeavors. They rarely argue in the show; this seems more playwrights Brown and Frew’s idolizing of their subject matter than it does with reality (every happily married couple I know fights over things big and small).

Other notable performances include Sam Ashdown as Carolina, a fellow culinary student who dreams of opening a sophisticated barbecue shack and Janet Ulrich Brooks as both Child’s cooking school nemesis Madame Dorin and her book-publishing advocate Avis.

If there is any edge to the show it is with the character of Jane Foster (Heidi Kettenring). A friend who served with the Childs in WWII, Foster was famously indicted by a Federal grand jury for espionage in 1957 (charges she continued to refute until her death in 1979). A scene set towards the end as the Childs are preparing to move back to the states has Foster realizing she will never return stateside. It allows Kettenring to display her formidable acting chops, but it’s the culinary equivalent of getting a spoonful of aspic when you had been eating fruit salad.

Posted by Misha Davenport at 11:58 AM No comments:

Preach the Gospel: The Mercury Theater's "The Color Purple" is a triumph! 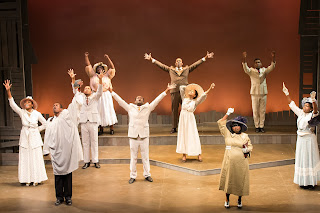 You know you are in for some truly great singing when a show begins with a featured soloist who proceeds to knock it out of the park.

That’s just what happens with Mercury’s intimate and emotional production of “The Color Purple: The Musical.” Donica Lynn, last seen in Mercury’s production of “Barnum,” approaches both the Opening Act 1 and “Mysterious Ways” with all the passion and fire of a Southern Baptist revival.

You just might find yourself raising your hand to God and shouting a few well-deserved “amens.”

Fortunately, the praise is not merely reserved for Ms. Lynn, but the rest of the 16-member cast and director L. Walter Stearns. Though the Mercury Theater may lack fly space or an orchestra pit, one still has the sense that this is a big show. In fact, it is as good as either the original Broadway production or the tour that came through here several years ago. The intimacy of the space (the Mercury isn’t much bigger than your average summer revival tent) seems to well-serve the story.

Based on the Pulitzer Prize-winning novel by Alice Walker, the musical follows the trials and ultimate tribulations of Celia (Trisha Jeffrey). She is 14 when we first meet her, pregnant with her step-father’s second child. She is soon separated from her younger sister Nettie (Crystal Corrine Wood) when Celia is married off to the cruel and abusive Mister (Keithon Gipson).


Jasondra Johnson’s Sofia is big, loud and proud. Married to Celie’s stepson Harpo (Evan Tyrone Martin), her unwillingness to let any man beat her down in the anthem “Hell No,” is one of the show’s highlights. It’s easy to see how the character might come to represent a beacon of freedom for Celie.
As Shug Avry, the sultry jazz singer and one-time lover of Celie, Adrienne Walker sizzles in Shug’s show-stopper “Push Da Button.” She and Ms. Jeffrey also harmonize sweetly in “What About Love.” Ms. Walker plays up more of the comedy than the sensuality, however. In a musical that has already been accused of glossing over the lesbianism inherent in the original source material, it is perhaps a telling choice that Mr. Stearns’ production is geared more towards those in the pews.

And speaking of church, I would be remiss if I didn’t give a shout out to the terrific, scene-stealing, comedic work of Carrie Louise Abernathy, Brittany L. Bradshaw and Sydney Charles. As a trio of busy-body, gossiping church ladies, Ms. Abernathy, Bradshaw and Charles mine their moments on stage for every laugh.

There are things even the finest production cannot seemingly overcome, however. A second act dream sequence “Africa” still sucks the life out of the show. Also, age mellows many things, but in its need to bring things to a satisfying musical conclusion, the show’s book resolves any lingering resentment Celie might have a little too quickly.

Still, as presented at the Mercury Theater, “The Color Purple” is a passionate and heartfelt production of one African-American woman’s ultimate triumph of self-discovery despite the odds stacked against her in a pre-Civil Rights era south.

Posted by Misha Davenport at 11:38 AM No comments: