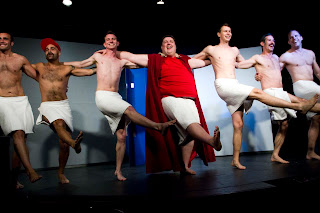 It looks like Chicagoans will have a couple more chances to go down the hole.

The Annoyance Theatre has extended the late night hit "Steamwerkz: The Musical" through Oct. 5.

The modern-day retelling of Alice in Wonderland is a "gay fantasia on local themes" (eat your heart out, Tony Kushner). Critics (inluding yours truly) have called it of the funniest shows of the summer. It has been referred to as the "Wicked" of Uptown (presumably where the towels --and not some green-skinned witch-- defy gravity on Friday nights). You can read my review posted here: http://triggercritic.blogspot.com/2012/07/msuical-dream-works-at-steamwerkz.html.

"The show has been sold out since we opened, so we're riding it 'til it goes limp" quips director Clay Goodpasture. "The cast and I are thrilled that it has been 'extended' for another long, hard month."

The original cast will remain in place for the extended run with the expection of Ben Kramer (Dewayne and Mad Max) who will depart the show on Aug. 31. pHProductions, GayCo and Second City actor Brett Mannes dons the towel beginning Sept. 7 .

It's like the friggin' "Facts of Life" in here.

You take the good: 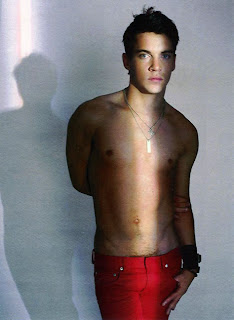 "The Tudors" star Jonathan Rhys Meyers will be sinking his teeth in the titular role of "Dracula" in a co-production from NBC and Sky. NBC describes the show --a broadcast date has not been set-- as "'Dangerous Liasons' meets The Tudors.'"

And then you take the bad: 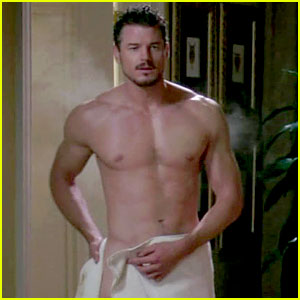 Eric Dane is leaving "Grey's Anatomy." Fans are no doubt hoping McSteamy leaves the towel on his way out.

Posted by Misha Davenport at 7:10 AM No comments:

The musical dream works at "SteamWerkz: The Musical"

On the surface, a musical set in a popular Chicago gay bathhouse might appear to be an unlikely setting for a musical. Yet, much like another Chicago-born musical “Urinetown,” “Steamwerkz: The Musical” manages to serve up a fairly satisfying –dare I say traditional- musical despite its rather unique setting.

Directed at a fast pace by Clay Goodpasture with musical direction by Tara Trudel, the show is a modern reinvention of the classic “Alice In Wonderland” tale.

New to Chicago, Nebraska farmboy Al (John Loos) is no sooner lamenting to his best straight gal pal (Jason Geis) of his lack of fitting in at any of the various Boystown bars and clubs when his eyes lock with his personal white rabbit, the tall, dark and handsome Stephen Stephan (Rob Anderson). Al follows Stephen down the proverbial rabbit hole into Steamworks (the alternate spelling of the title predates the Chicago spa’s coming on board as an unofficial sponsor of the show).

Along with the ever-grinning Chester (Andy Eninger), Dee and Dum quickly give Al the “Lay of the Land” with a tune that lays out the rules of the club in an amusing fashion. Al receives further advice by the show’s catapillar, an ex-military man named Dewayne (Ben Kramer). Wonderland’s smoke haze is replaced here with the steam of the sauna.

Before long, Al has found his object of affection, but there is of course one hitch. Stephen is attached the club’s queen of hearts, the King of Steam (Geis as less a queen of hearts than sea urchin from “The Little Mermaid” ).

The King has eyes and ears throughout the club which makes the consummation of Al and Stephen’s love a precarious affair. After all, no one wants to lose their head.

Loos looks and acts the part of a fish-out-of-water farmboy quite well. He did have some trouble finding the pitch in several of the first act songs, though. Anderson managed to carry much of the show with perfect pitch and comic timing.

With its composite of various melodies, the first act ended “Fall Into the Hole” is reminiscent of “One Day More” from“Les Miserable.” Another first-act number includes a chorus of towel-clad tap dancers (albeit with bare feet; no one wears tap shoes to a bathhouse).

At the core of the show (and why it works as a musical in a traditional sense) is the fact that most of the characters are seeking love, but settling for less. That, along with the show’s climactic number “Happy Endings” are the fodder of universal truths in musical theater.

In fact, it is exactly the kind of breezy, gay-themed musical theater David Zak used to frequently preduce as part of the Bailiwick Theatre's Pride series. The show serves a niche not unlike the productions from Hell and a Handbag and the Scooty and JoJo Show. It's a fun, campy romp and the type of show Chicago's professional queer theater companies (Bailiwick Rep and About Face) don't seem interested in producting anymore, alas.

The show could benefit from the addition of harmonies (far too many of the ensemble songs are in unison) and a lead actor capable of singing them. For the most part, “Steamwerkz: The Musical” delivers enough eye candy and laughs to make it worth falling into the hole, though.