They aired "The Playboy Club" instead of this?

Ron Moore's "17th Precinct" was discounted by many sight-unseen as "CSI with wands." Alas, the show will never see the light of day. The pilot is up (for a limited time, no doubt) on Vimeo.

The nitty-gritty of it: set in an alternate world with no oil or electricity, cops use magic to solve crimes. This really isn't doing it justice, though. IMHO, the pilot showed much creativity and promise.

I can't help but thing this would have made a nice lead in to "Grimm" (the other NBC show you're probably not watching).

Thoughts? I'm all ears.
Posted by Misha Davenport at 7:04 AM No comments:

Spend the holidays with "The Addams Family" 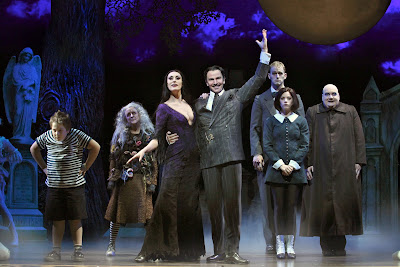 by Misha Davenport
(cross-posted from broadwayworld.com)
It took more than two years, but the creative team behind the musical “The Addams Family” deserves a chorus of finger snaps for finally getting it right.
The show in its current (and, hopefully, final) incarnation is a sheer delight and rightfully deserves to be the hottest show in town. It’s a pity that its initial run was cut short by a week. The touring production is far superior to the pre-Broadway that opened here a couple of years ago and even the recently-closed Broadway production. It’s a horrifyingly humorous romp that shouldn’t be missed. 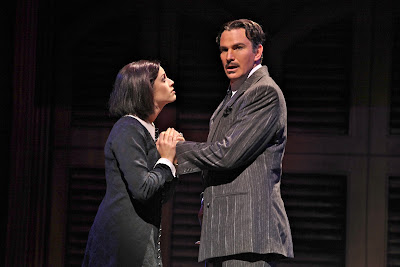 The plot involves Wednesday Addams (Cortney Wolfson whose big voice contradicts her lithe body) who has fallen in love with Lucas Beineke (a likeable Brian Justin Crum). The pair are polar opposites. She’s an Addams and he’s from Ohio. She is impulsive. He is reserved Yet, the pair have fallen in love.
Addam Family matriarch Gomez (Douglas Sills, who manages to better the original Broadway Gomez Nathan Lane in his comic delivery) finds out about his daughter’s engagement and Wednesdays guilts her father into keeping the secret until the two families can meet and make an honest assessment of each other without the Damocles sword of a wedding hovering above everyone’s heads.
Gomez and Morticia (Sara Gettelfinger, who is far more alluring and a better singer than Broadway’s original Morticia, Bebe Neuwirth) pride themselves on their frank, open and honest relationship and Gomez quickly realizes he’s trapped and bound to upset one of the two women in his life. 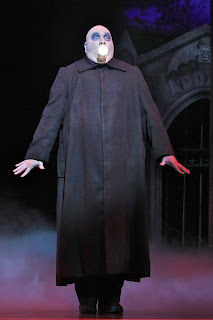 Meanwhile, the bald and slightly asexual Uncle Fester (the hilarious Blake Hammond) is pining for his love (the moon; this is the Addams Family afterall). Wednesday’s masocist little brother Pugsley (Patrick D. Kennedy) frets that his sister’s boyfriend will put a crimp in his sister torturing him. Grandma (Pippa Pearthree) just wants to be left alone with her potions and herbal remedies in the attic. Lurch (the rich bass Tom Corbeil) the undead butler seems content to go about his duties.
The future in-laws are initially picture perfect, but it only take s a few scratches to see their dysfunctional flaws. Mal Beineke (Martin Vidnovic) is a controlling workaholic. His wife Alice (Victoria Huston-Elem, a terrific understudy in the role normally played by Crista Moore) is high-strung and prone to bouts of rhyming. Lucas finds himself at that fork in the where he must choose whether to disappoint his parents or himself as he marches to adulthood. Dad wants him to join the family business, but Lucas isn’t so sure.
For as kooky and altogether spooky as The Addams Family may be, the success of the franchise has always relied on the fact that the hopes, dreams, fears and problem they face at their core never stray from a familiar and immediately identifiable path (albeit a less well lit one). 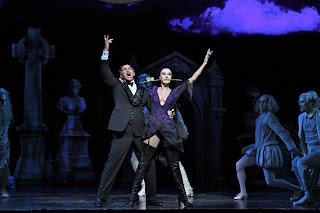 While the situations are most often played for laughs, the comedic show is not without its touching moments, though. These include “Happy/Sad” in which Gomez attempts to explain how he really feels about his daughter growing up and Gomez and Morticia’s duet “Let’s Live Before We Die.”

"The Addams Family" is one family worth visiting this holiday season.
Posted by Misha Davenport at 3:43 PM No comments: 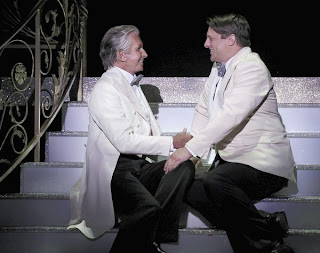 by Misha Davenport
(cross-posted from broadwayworld.com)
It’s hard to believe that the musical version of the French farce “La Cage aux Folles” is almost 30 years old. And yet, the original stage musical first premiered back in 1983.

Albin worries about growing old and losing Georges to a younger man. He abates his fears by putting “a little more mascara” on and it is under the mask of the feminine that Albin, as the club’s star Zaza, is able to face what life throws at him.

Until, of course, until the son they have raised together (Billy Harrigan Tighe as Jean-Michel), returns home to announce his engagement to the daughter of a conservative politician and his desire that when the future in-laws meet his parents, that Albin is out of the picture.

As Albin, Sieber is the reason to see this current tour. His rendition of the first act closer “I Am What I Am” is delivered with all the raw emotion and intensity needed for such an anthem. It’s a performance on par with Jennifer Holliday’s “And I Am Telling You, I’m not Going”(from “Dreamgirls”) and Patti LuPone’s “Rose’s Turn” (from “Gypsy”).

Unfortunately, Hamilton fares far worse as Georges. I actually caught Jeffrey Tambor in the Broadway revival shortly before he quickly left the production and Tambor offered more in the role. Hamilton’s wooden performance and occasionally flat delivery of both line and lyric means he joins the growing list of iconic celebrities to grace the Chicago stage in roles that are ill-suited for their talents.

Jerry Herman’s score has never sounded better. My problem has always been that Herman was a little bit too eager to reprise many of the catchy tunes to death. Still, it is a rare musical composer who manages to leave you wanting more, not less.

In terms of gay theater, “La Cage” belongs on the list alongside “Angels in America,” and “The Boys in the Band.”Without a doubt, it was and remains remarkably ground-breaking given the gay family central to its plot. Harvey Fierstein’s book, while edgy in the ‘80s, still manages to feel somewhat contemporary thanks in no part to the glacial speed at which gays and lesbians have received access to basic civil rights (Even a blue state such as Illinois still only has civil unions --a foot in the door, one toe at a time, if ever there was one).

If the show feels dated at all, it is in the fact that a same sex kiss is saved for the end of the second act (as the final curtain is descending). In an era when gay teens are losing their virginity in the primetime world of “Glee,” a same sex kiss at curtain seems hopelessly old fashion.

A Christmas Story, The Musical! aims for Chicago theatergoers' hearts

Cross-posted from Broadwayworld.com
Editor's note: I thoroughly enjoyed this show! 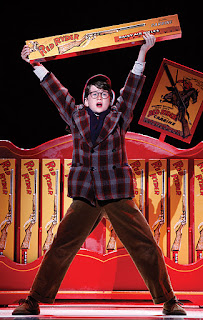 It began as a couple of chapters of a book of short stories by radio humorist Jean Shepherd, then a sleeper movie with a cult following and now “A Christmas Story, The Musical!” hopes to get a leg up on the other holiday theater traditions with a seasonal run at the Chicago Theatre.
And yes, Scrooge and the Nutcracker Prince better watch their backs. You might say the case of “A Christmas Story” are both armed and have a leg up on their competition.
Shepherd’s 1966 collection of short stories, In God We Trust, All Others Pay Cash, served as the basis of the 1983 film, which starred Peter Billinglsey as a Ralphie, a kid who dreams of the ultimate Christmas gift, a Red Rider BB gun.
Playwright Joseph Robinette (below), who wrote the book for the musical version, says one of the things that works so well about both musical and film is its relative simplicity of plot. 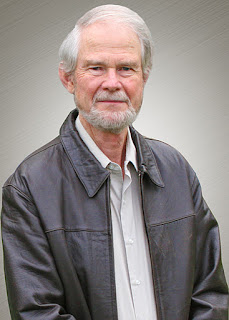 “It’s real life. Ralphie doesn’t want the universe. He wants one thing. We can all relate to wanting that one gift, whether we eventually got it or not,” he says.
Woodstock, IL.-based Dramatic Publishing held the rights to the material and had some success with region productions of the non-musical version of the holiday classic (including a 2007 Chicago production by Theatre Wit). A musical version was perhaps inevitable. Dramatic Publishing approached Robinette about writing the book for a musical adaptation.
Robinette was no stranger to Dramatic Publishing or adapting other works for that matter. Dramatic Publishing licenses Robinette’s musical adaptations “Ann of Green Gables” and “Charlotte’s Web,” to name a few.
For his part, Robinette says he was quite well versed in the original source material.
“I have four sons who all have the movie memorized. I’ve probably seen the movie ten or more times,” he says with a chuckle. “We did have someone transcribe the movie into hard copy for us, but I can’t say I really needed to refer to the hard copy much.”
Nonetheless, he says the task at hand was daunting.
“There is always an apprehension. You can’t help but think ‘how are we going to do this on stage?,” he says. “And then you know you also have to find a way to make it just more than the movie played out on stage.” 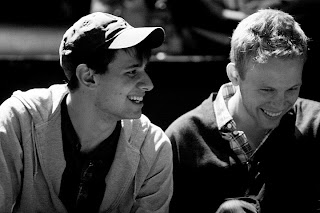 Composer and lyricist team Benj Pasek and Justin Paul (Left) agree that the task of adapting a beloved classic was a bit intimidating.
“Artistically, it is both a blessing and a curse,” Paul says. “You have a built-in audience of fans of the movie, but there’s only so much you can stray.”
“It’s seen by millions of people every year,” adds Pasek. “When we initial approached it, we were very aware and cognizant about what people loved about the film.”
Playwright and lyricsts/composers all realized they had to scale back some of the film.
“It’s an hour and a half film and we had to add an hour of music to it,” Robinette explains. “We knew we had to get some of the iconic moments into it, but you can’t put everything in there.”
“What are the moments that have to be in. no matter what happens these have to be in the show,” adds Paul. “We want to put everything on stage, but we can’t. What ultimately is helping us to tell story about a kid who wants this one thing and how his family celebrates Christmas.”
Ralphie daydreaming about his gun became “Ralphie to the Rescue.” 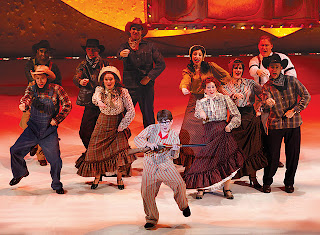 “A little boy’s fantasy about how he saves the day is the stuff of musical theater,” Pasek says. “That moment in the show came the easiest for us.”

Ralphie’s dad winning a leg lamp in a newspaper contest became the show-stopping “A Major Award” complete with a leg lamp kickline, natch.

Robinette says one of the iconic scenes that was most tricky for him was the “tongue stuck to the flag pole” bit. 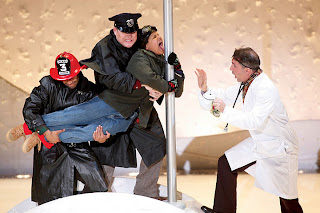 “It’s a very cinematic scene. You’ve got a kid with his tongue stuck to a pole, fire trucks and police cars arriving, a view of things from the window of the school and the kids’ reactions. It was a challenge to make that all work on the stage, but I think we pulled it off.”
“They did an amazing job in adapting it,” says 12 year-old Clark Hallum, who plays Ralphie in the production. Every iconic scene is now attached to a song.
“It’s a crazy experience,” Hallum adds, “I love the movie and still can’t believe I get to be a part of the musical.”
“A Christmas Story, The Musical!” runs through Dec. 30 at the Chicago Theatre, 175 N. State Street. Tickets, $35-$79. Call (800) 745-3000; thechicagotheatre.com or achristmasstorythemusical.com
Posted by Misha Davenport at 10:10 AM No comments: