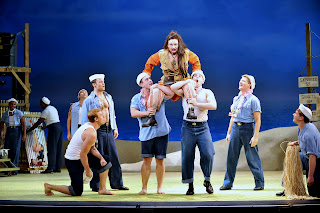 "South Pacific" features a promising young cast and it's share of "Bali-lows"
(Cross-posted from BroadwayWorld.com)

By Misha Davenport
“South Pacific” at the Cadillac Palace Theatre? It was a somewhat enchanted evening.

The economics of producing a live theater event –let alone a full-blown musical—cannot be easy. Most producers I know do it more so out of a love of theater than any notion that they are ever going to see a return on their investment. So, I suppose I shouldn’t fault any producer willing to put his or her skin in the game in what amounts to a noble effort to keep musicals -one of America’s greatest cultural achievents—alive.

And yet, I can’t help but find some fault with NETworks Presentations, the folks behind the current tour of “South Pacific”(playing through Feb. 26) and several other non-Equity tours that have rolled through town under the auspices of “Broadway in Chicago.” NETworks’ shows certainly aren’t community theater, but Broadway they ain’t.

The pared-down production of “South Pacific” currently playing at the Palace might wow them in Debuque, but this is Chicago and we’re fortunate enough to have an embarrassment of theater riches. You don’t need a ton of money to present a quality performance; you just need some creativity and a commitment to quality work. 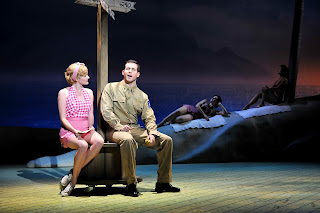 For the most part, the cast show’s a commitment to their craft. As the “cockeyed optimist” Ensign Nellie Forbush, Jennie Sophia effortlessly gives a zestful performance. She has a beautiful voice and manages to thoroughly charm the audience.

As Lt. Joseph Cable, Shane Donovan is occasionally wooden, but he possesses enough hunky bravado and boy can the guy sing.

Christian Marriner also is in fine comedic form as the scheming yet loveable Luther Billis.

Faring less well is Marcelo Guzzo as French ex-patriot Emile de Becque. Guzzo has a rich and full voice needed to pull off “Some Enchanted Evening,” but his accent however can best be described as “continental” as it truly is all over the map. Spoken lines had a Spanish flavor and his singing voice had traces of both German and Italian. Suffice to say, you’ll have a hard time believing he’s French. 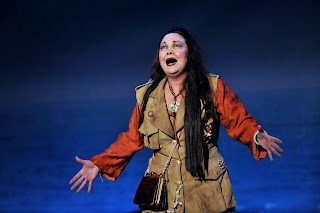 ﻿The most interesting choice of the night comes from Cathy Foy-Mahi as the native black marketer Bloody Mary. It’s normally a light-hearted, comedic role (in less skilled hands it sometimes even boarders on a racist stereotype). One of the strongest scenes in the show is when Bloody Mary attempts to prostitute her young daughter Liat (Hsin-Yu Liao) to the handsome and naïve young officer Cable.

﻿
Rogers and Hammerstein produced in a time when Broadway shows weren’t usually dark (they were once famously accused of sugar-coating the Nazi occupation of Austria in “The Sound of Music”). “South Pacific’s” anti-racism anthem “You’ve Got To Be Carefully Taught” predates the Civil rights era by a decade or so, though. While Bloody Mary’s actions are probably historically accurate, I’m not sure if it works as it ends up taking some of the weight away from some of the other serious elements in the show.

The thing that is perhaps most disappointing is the orchestra. The last time Rogers and Hammerstein’s Pulitzer Prizw-winning show came through town it featured a full orchestra. The current tour boasts ten musicians and two computers (light even by tour standards).
Without a full orchestra, you can’t help but feel like this is a stripped and watered down version of “South Pacific.”

Yes, the score features some of the best music from the American Songbook including “Some Enchanted Evening,” “There is Nothin’ Like a Dame,” “I’m Gonna Wash That Man Right Outa My Hair,” and “A Wonderful guy.” You could accompany these tunes with a chorus of kazoos and it would still feel magical. It’s best not to give NETworks any ideas though.

If you’ve never seen “South Pacific,” you will probably find enough “Bali Ha’is” to warrant your ticket purchase, though.

Posted by Misha Davenport at 6:46 AM No comments:

The "court" rules in favor of "Legally Blonde"

OMG, but how “Legally Blonde” has grown on me.
When I first caught the 2007 Broadway production of the musical (based on the 2001 movie starring Resse Witherspoon and the original novel of the same name by Amanda Brown), I was underwhelmed by its rather traditional comedy musical score, pop culture references and shameless production promotion (Red Bull was featured in both the script and set design).
Red Bull still figures into both script and set in Mariott Theatre in Linolnshire’s regional production of the show, currently playing through April 1, but for some reason the whole affair comes off –to borrow a lyric from the first act closing song—“so much better than before.”
If “Mama Mia!” is the Hostess cupcake of Broadway musicals, “Legally Blonde” is most assuredly it’s big, pink cream-filled Twinkie. It’s a fast-paced, high-energy musical comedy that will have even the most cynical and seasoned theatergoer smiling.
The plot in a nutshell:  Petite blonde Elle Woods (Chelsea Packard) is dumped in the last semester of her senior year by long term boyfriend Warner Huntington III (Cole Burden). Warner, it seems has designs on both Harvard Law School and a future in politics and wants “less of a Monroe and more of a Jackie.”
With the help of her Delta Nu sorority sisters, Elle manages to pass the LSAT and also get into one of the most competitive law schools in the country, where she proceeds to try and win him back.
Of course, she is the laughing stock of her class and her professor (Gene Weygandt as the gumpy, tough as nails, high-profile attorney and professor) takes delight in ridiculing her.
With the help of Emmett Forest (a likeable David Larsen), a working class advisor trying to better himself, her manicurist Paulette (Christine Sherill) and a Greek chorus made up of a trio of her sorority sisters (Alexandra E. Palkovic, Vanessa Panerosa and Tiffany Topol), she discovers not only a passion for law, but also the inner-strength to be more than just someone’s girlfriend.
Packard initially plays the character a bit more shallow than in previous Elle’s I’ve seen, but it ends up working to the show’s advantage. Her transformation from blonde to barrister in the second act is akin to as a certain cockney flowergirl’s transformation to proper lady in “My Fair Lady.” By the show’s end, you can’t help but root for her.
As the down-trodded, working class manicurist Paulette, Sherrill manages to ground things in reality. The lyrics of her one solo “Ireland” might be written to illicit laughs (and make no mistake, they do), but Sherrill delivers them with such heartfelt intesity that you immediately recognize another weary fellow traveler whose journeys have sometimes afforded more disappointment and regret than joy and achievement.
If there is anything uneven it is to be found in the show’s leading men. Burden is such a heel and Larsen is so perfect, Elle’s eventual choice is a bit of a no-brainer.
“Legally Blonde” might not be Ibsen, but it still is entertaining.

No one starts out in life deciding to be coulrophobic. And I certainly wasn't brought up in a home that was particularly coulrophobic.

And yet, I stand before you today embracing my own coulrophobia.

Coulrophobia, for those who can't read a blog and search Wikipedia at the same time, is the irrational fear of clowns.

Though, in my case, I'm not so certain it is necessarily an irrational fear. It all began when I was three years old and my parents took me to the State Fair. After waiting in line for what seemed like hours, my father made me sit on this guy's lap for a photo: 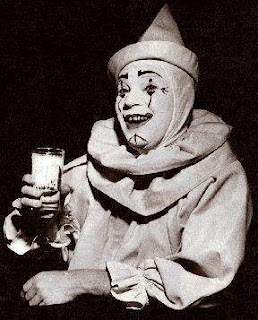 Milky the Clown was the spokesclown for Detroit-based Twin Pines Dairy. Even if the world had never seen the likes of John Wayne Gacy or Pennywise (from Stephen King's It), Milky would still be one scary clown.

I honestly don't know much about the man behind the greasepaint. Clare Cummings was more than just a dairy icon. He apprently used to host a TV show back in the '50s (way before my time) called "Milky's Movie Party."

That's the extent of my Milky knowledge. The additional mystery only adds to my clown-based paranoia. 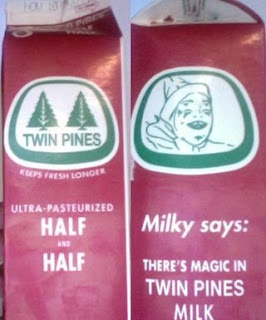 Yes, there is magic in Twin Pines. And, to my impressionable mind, no doubt the ground-up bones of children who sat on that friggin' clown's lap.

So, thanks to my parents for ruining trips to the circus and Detroit-based dairy products for life.
Posted by Misha Davenport at 7:46 AM No comments: